The Money men; Levy & Mourinho…  for the benefit of… well, who?

Our illustrious manager has managed some of football’s most celebrated and most prominent teams in the world. And he has many trophies to show for his success.

Mourinho, who will be 58 in January 2020, was wooed to the club when Mauricio Pochettino went past his sell-by date (and no trophies). It was alleged that Daniel Levy showed Jose all that glitters can be even more glittering if he came and brought wonders to our club. So he arrived, quick-fast. It was believed that while Mauricio was trying to work out why his golden touch had failed him, Levy was already in talks with Jose. He has been an admirer of his for years. I think Mauricio was just a stop-gap until the stadium was built and then move on to a higher grade manager.

Some sources have said that Jose’s estimated net worth is between $60m to over £100m. Some estimates have said even more.

According to the font of all wisdom, The Daily Mail, our manager signed a beneficial deal to take over from Pochettino. That deal is supposed to be worth around £15 million-a-year. This would make him one of the highest-paid managers in the Premier League and taking him to twice the amount what Pochettino was paid. Obviously, Levy things highly of Mourinho, and he does come with a world-renowned reputation… unlike Pochettino, who came with nothing, other than his belief in God and a wing and a prayer.

On top of all that, the Lollie Jose will get from Levy, it is reckoned that following production/ company endorsements, Jose’s annual income comes in at over a fantastic £20 million. For that, I would not only expect trophies but the league as well. On paper, he is going to give Klopp a run for his money… in reality, it could be a different kettle of fish if he doesn’t get the players he wants. He’s got to remember that he isn’t at Chelsea, United, Benefica or Inter Milan, but Tottenham, where Daniel Levy keeps his bank balance, or I should say, Spurs money close to his testicles.

To be fair on Jose – at the moment – his current ragamuffin outfit was inherited, and not something he has put together under his own talented eye. So any failures can still be pointed at Pochettino/ Levy. But the time will come that all of Pochettino’s squad will be eradicated and he will be left with his own intended players. Unfortunately, he came to the club – on his white charger – at a very awkward time. The COVID-19 virus has buggered his and Levy’s plans up… that is if Levy had any plans beyond giving him breathing space by appointing “The happy one.” How long happy he will be is another question.

My thoughts on the matter;

With Daniel forking out an extraordinary sum of money – extraordinary for Levy – it seems to show that he is determined to finally bring silverware to the club and compete with the best. Or he has a master plan, which is, he thinks Mourinho’s wages is a cheaper option than splashing out loads of money on individual players. If it goes pearshaped, then the finger can be easily pointed in a particular direction. Our Daniel is a very clever-thinking and shrewd businessman where the money is concerned (or at least saving money). He probably learned a lot from his mentor Joe Lewis (not the boxer, but the money collector who owns the club… and of course a tax-exile… he certainly doesn’t want any of his billions of pounds going to the taxman… or, by the looks of it, to the team either).

Some are wondering what is more important to Daniel, the success of his spanking new stadium or the team or both? At the moment the new stadium is a cash cow – suspended temporarily because of the virus – while the actual team is a… well, is a what? That is what Spurs fans are asking themselves all around the world.

It has been suggested by many cynical fans that the new stadium is his focus and that it will be the golden arena that will bring him his rewards, not the team. Daniel Levy has already separated the stadium from the club, with both having their own separate logos and identities.

Daniel Levy is also one of the highest-paid directors. Any profits, some say, could be channelled into his new venture, American Football and making the stadium even greater. Of course, this is all speculation… in his heart and brain (yes, even the Tin-man had a heart… but then that was in a fictional adventure somewhere over the Rainbow… reality is a different matter), his vision – let us be fair – could be to put the Spurs Cockerel at the top of his magnificent empire, or the empire he is building. Whatever way you look at it, one winner is undoubtedly going to be Daniel Levy, no matter how many Mourinho’s join our club just to give that winning feel to the supporters… 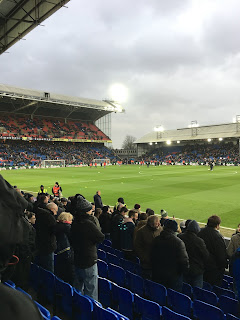 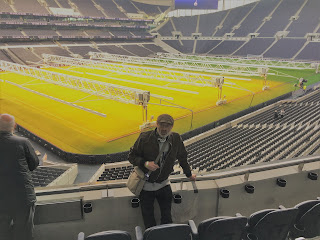 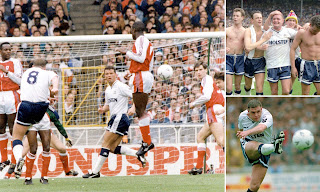 Classic games that I’ve been to, First up, the FA Cup semi Final in 1991