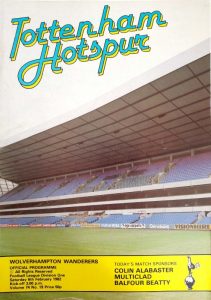 The day after this great result Ricky Villa grabbed all the headlines with his hat-trick for us against the Wolves on the day that the new West Stand was officially opened at White Hart Lane in February 1982.This is my seventh article on my greatest games that I’ve been to.

But what else happened on that day? Well, It was Saturday, Thatcher was Prime Minister, in America Ronald McDonald Reagan was in charge of the White House. In the charts, in America, was Centerfold by The J. Geils Band. In the UK A Town Called Malice / Precious by The Jam were at the top of the charts. Evil Under the Sun, directed by Guy Hamilton, was one of the most viewed movies released in 1982 while The Cinderella Complex by Colette Dowling was one of the best selling books. On TV, people were watching Brummkreisel. If you liked videogames, you were probably playing Super Pac-Man or Getaway. Exciting times… eh!

Other hits in February of that year were: Top #10 songs in the USA

Music has always been a big thing for me, and I was an avid collector of singles (vinyl's in those days). All the top singles I purchased in the English charts that year (and not just that year). And most from the American charts. Now all my vinyl’s and CDs are stored away in a cupboard.

The day was mild, as I remember it. I can't recall if we had rain, snow or not. Which doesn’t really mean anything other than the deterioration of my mind… so be warned, don’t get old otherwise you could end up like me (that’ll put the fear of God in you!). What was I doing? Oh, yes… how easy we forget!

Forgive me if I am wrong, but at the beginning of that season, our first game was supposed to have been against Coventry City at home. I arrived at the stadium early, only to find that the match had been cancelled because the new stadium hadn't been finished or it hadn't been cleared to play. Or it was unsafe (something along those lines). I am sure somebody will put me right if I am wrong. Nevertheless, as a programme collector, I made sure that I bought three programmes. So, I wasn't totally heartbroken (not totally, but near the edge). After purchasing them, a quick turnaround and a long trip back home. That was at the beginning of the season. Now the story goes back to the day concerned.

I can't remember if I went with friends or met up at the ground on that day. But I do know that on a good day I could get to the ground in an hour and a half, on a bad day it could take me over 2 hours. That is using British rail and then the underground (from where I lived). Today I drive straight there, which takes me about an hour and 40 minutes (again, depending on the traffic). I've also parked, in the past, opposite the ground (when it was free and when it wasn’t free). How things have changed. Now you can't get anywhere near the stadium by car unless you've got a pass. If you are one of the wealthier Spurs clients, you can park under the stadium. Which, by the way, I had a chance to do when I went on my Valentine’s trip/ tour around the stadium. But I wanted to drink, so I had to forget that pleasure (I ended up going back to Hanna’s by taxi).

Programmes were another priority of mine (if you haven’t guessed by now). Which meant either a trip to the Spurs shop, one of the sellers outside or one of the collectable programme stalls.

As I said, this match marked the official opening of the new West Stand with the duties performed by Sir Stanley Rous, the former President of FIFA. So, once we got into the ground, queued, no season tickets then (for me that is), I just paid at the gate (the good old days). Nowadays you would have had to purchase your ticket in advance (which could be hours queuing on the computer or phone, unless, of course, you had an expensive season ticket). Anyway, I am digressing, once in, food and drink and then to our place of standing. Usually, for me it was in the West Stand, however, no Shelf this time around, so I think I was in the East stand if I recall. The West Stand area also got more expensive, you had to pay extra for such luxury building work/ modernisation. Now, even that is demolished, along, of course, with the rest of the stadium.

The ceremony commenced, we made all the right noises then the teams jointly marched out together. We were apprehensive (but then again, aren’t we always!), but it all ended, ok. We celebrated in grand style with an emphatic 6 – 1 win over a poor Wolves side who were to be dumped out of the league at the end of the season. Ricky Villa rose to the occasion once again by scoring a hat-trick, but the creativeness behind the success was our own Glenn Hoddle who in the words of the Tottenham programme writer 'had an outstanding game in which a high level of determination was allied to his exceptional ball skills'.

Glenn Hoddle scored Spurs' first goal from the penalty spot after 9 minutes following a foul on Mark Falco. Up we jumped and what a great penalty it was. Then Villa got his first midway with a shot from the edge of the area on 31 minutes.  Again, up we jumped (the more goals that were scored, the better we exercised). Even though that was our second, the feeling was that there was more to come, and more to come they did. Even though Wolves scored just before half-time.

Two-one to us, but if I recollect rightly, we didn’t feel nervous. Wolves weren’t playing that well. Of course, that didn’t mean bad teams couldn‘t sneak a win. To be honest, there were many wins we sneaked, even though we played poorly. While there were many games, were we also dazzled and lost.

With the break, it was a rush to the bar, drinks and food (maybe a toilet break as well) and back to our places. It was usually good, that is getting back to where we stood before the break. Most fans are very territorial when it comes to claiming their spot.

But in the second half, it was all one-way drive-through with Villa completing his hat-trick with goals in seven minutes, after 50 and 57 minutes. Garth Crooks scored with a header from a cross by Steve Perryman, and then Mark Falco completed the scoring in the 71st minute from another cross from the right by Perryman. We were delighted and thought what a brilliant way to mark the opening of the new sand. But it wasn’t all happiness, many mourned the passing of the Shelf. It was also the dawn of a new era. An era of corporate boxes and wealthy clients and price rises. Nothing was going to be the same. Even though it was a gradual change, but a change nonetheless.  Irvin Scholar, our director then, had grand ideas for the club. Even though he didn’t achieve all he hoped while he was there, others, that came after managed to build on his vision.

But that wasn’t the end of it. We got to final of the League Cup, only losing to Liverpool 3-1. But not all bad news; we beat Arsenal, Leeds, Aston Villa, Chelsea and Leicester City to get to the final of the FA Cup. And after a replay, we finally beat our opponents QPR. We won that with a penalty from Glenn Hoddle. The final was nothing like the previous year, but at least it was another trophy.

That season I went to all the matches, home and away. At the beginning of that season, we shared the Charity shield with Aston Villa. The start of the following season we faced Liverpool in the Charity Shield but sadly lost 1-0. So, a season of mixed emotions. But like always, we lived to fight another day.

A great day, a great season… three times to Wembley and two trophies to show for it (if you count the Charity shield draw, which we shared with Villa).

After the game, we all said our byes and then a quick rush back to the train station and home. Hopefully in time to watch the football highlights on TV, whichever channel it was on then. 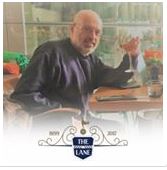