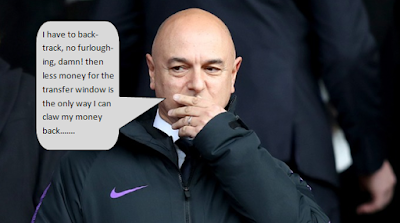 After pressure from Tottenham fans, the Tottenham Trust and the press Daniel Levy capitulates.

Daniel Levy has reversed his decision to use the government's furlough scheme for some non-playing staff during the coronavirus crisis following criticism.

On 31 March, the club announced 550 staff would take a 20% pay cut in an attempt "to protect jobs" and save the club money.

But on Monday, a Spurs statement said non-playing staff will receive "100% of their pay for April and May". Only board members will take salary reductions, the statement added. But nothing about their millionaire players. That statement includes Daniel Levy, who earned £7m last year (so any pay cut would be insignificant). Maybe he should donate some of his wealth to the NHS cause (but perhaps I am stretching believability to its limits).

Levy  statement was: "We regret any concern caused during an anxious time and hope the work our supporters will see us doing in the coming weeks, as our stadium takes on a whole new purpose, will make them proud of their club." I bet he regrets. Such publicity doesn’t go down well when one is looking for stadium sponsors.

The Tottenham Hotspur Supporters' Club (THST) - which had pressed the club to "do the right thing" and reverse the decision, saying "mass supporter opinion against these decisions had solidified" - thanked directors "for finding an alternative way forward".

"This is the first step, but a big step, in restoring relations between fans and the club," the Trust added.

Spurs' statement on Monday said: "With no clarity on when football might resume, and under what conditions, we shall continue to keep this under ongoing review. We are acutely aware that many supporters were against the decision we made regarding furloughing staff who could not carry out their jobs from home. This once again underlines that we bear different pressures to other businesses, many of whom have and will continue to apply for support from the scheme as the government intended."

Tottenham added they would continue to consult with stakeholders and the THST, "who share our desire to protect jobs".

Tottenham also announced they will become the first club in the Premier League to provide equipment at the Tottenham Hotspur Stadium for drive-through Covid-19 testing for NHS staff and their families.

But Newcastle United and Norwich City are among the Premier League clubs who will still furlough some non-playing staff. In the case of Newcastle, the billionaire Mike Ashley is the owner, so no surprise there, then.

Liverpool have already reversed their decision to place some non-playing staff on temporary leave and apologised to fans following a fierce backlash.

Daniel Levy didn't reverse his decision out of the goodness of his heart, but because he was put under pressure and humiliated by the media, the general public and the Tottenham fans.

Not only that, but caring people who work within Tottenham's walls had advised Levy that it would be a wrong move to furlough their staff. But being pig-headed and a driven-capitalist, then one is guided and focused by making money (not charitable acts); thus, the human consequences of such decisions get pushed to one side.

It was said at the time that companies which were of a similar size to Tottenham were using the job retention scheme that the government put in place. But football is a different kettle of fish. Football pays its players millions of pounds; football receives a lot of TV money - therefore there is the scrutiny that other businesses just do not have.

Daniel Levy must have realised that when he went down this route (of furloughing his poorer staff), he would be open to criticism? Or maybe there was just no connection between a millionaires life and style to those that he employers at the other end of his business.

However, I am sure that Daniel Levy being Daniel Levy, will find other ways to recoup that money he was forced to give back to his lower down the table staff.  Scrooge-like characters don't suddenly change their spots just because they have been humiliated into doing an about-turn. Revenge is always in the air. If anybody watches A Clash of Kings, by George R.R. Martin, then it might be apt to quote this: "I will hurt you for this. I don't know how yet, but give me time. A day will come when you think yourself safe and happy, and suddenly your joy will turn to ashes in your mouth, and you'll know the debt is paid."

One of the areas that might suffer – and it won't be the shareholders, directors or players – could be the transfer window as it has been Scrooged back for years so that extra money can go in other directions; the building of the club and their Directors.

How long will it be before players like Kane and Son, and even the manager, start to twig that it isn't about the team, but the Tottenham stadium, Lewis and Levy? I could be wrong, and I hope I am, but only time will tell. The team/ club/ the community wouldn't exist if it weren't for the loyal and dedicated supporters, along with their dedicated staff. So a bit more consideration wouldn't go amiss.