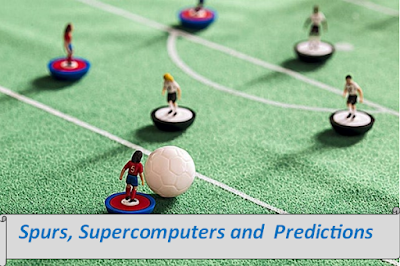 A supercomputer has predicted that Manchester United will leapfrog Chelsea in the Premier League table and finish in the top four. Tottenham will finish 7th.

The top nine will look something like this, according to the computer.

Now, I have no problems with Arsenal being in 9th (actually, I do; I would prefer them even further down, or fighting relegation… but we can’t have everything).

At the moment the league table is as follows; when it had stopped for the virus break.

Now we can expect three of our four players to be back from injury by the time we resume battle. It will be like the start of a new season, a full compliment. Granted, the same applies to the other teams. But they were never anything special, including Liverpool (they got where they did because of the fumblings of the others).

On paper, in my humble opinion, we have a better squad. That is when we have had a full squad. If Mourinho can work his magic while we are having a virus break, then we could be in for a surprise.

We are currently 12 points behind third place, behind fourth (Chelsea) we are 7 points. Both gaps can be narrowed and overtaken.

Yes, a lot of “ifs,” but if I had told you that football would be suspended indefinitely, You’d think I was pulling your Roger-Dogger. The team in the top flight that the virus benefits the most, is us. Does that mean lady luck is squeezing our balls to seventh heaven? I’ve seen less, for more.

I’ve also had the privilege of seeing the players training and working out (whether as a team or in isolation). This extra time has benefitted them and Mourinho. He is one of the most experienced managers Tottenham has had for many years… in fact, we have to go back to Bill Nicholson, and he wasn’t experienced at all when he became our manager. The closest manager after him to have come with experience was probably Terry ‘Artful Dodger’ Venables. And he was… anyway, we won’t go into that. OK, there is Harry Redknapp and.... but you get my drift!

If the other clubs see us with a full complement, they will get jittery. On top of all that, some of those clubs I have mentioned are still in other competitions, which will put added pressure on them. So, getting knocked out of the Champions League could be a blessing in disguise.

Lucky can be a funny thing. Luck is also the sense to recognize an opportunity and the ability to take advantage of it. Hopefully, we can. Under Pochettino, we’ve managed to stay in the top four on a wing and a prayer. Now we’ve got Mourinho, over to him.

I am quite happy to play Russian Roulette with a loaded gun, provided that gun has dumb, dumb bullets in it. I may be looking through rose-tinted glasses, but I am not stupid or suicidal enough to think I see everything correctly. Better people than me have predicted everything on a whim, and have fallen by the roadside.

If we do well and manage to crawl from 8th to 4th or even higher (but let us not push it), then we should have a plaque at the stadium to commemorate lady luck.

Just one final note on this supercomputer. Many, many years ago, I used to read boxing magazines. They did a computer exercise to pick the best all-time World Heavyweight boxer. The result had some stupid wins/ defeats. But as somebody once said, you put in shit, you are going to get shit back at you. Yes, I know it is a fun thing, but a fun thing with no intelligence behind it, other than a boredom exercise to wind everybody up (unless the computer manages to put your team in a placing of your liking).