WE LOST, BUT IS THERE HOPE? 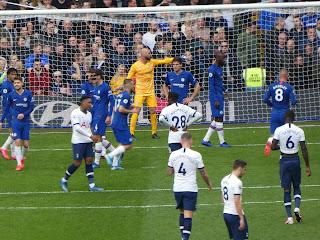 What can one say about our humiliation at the hands of Chelsea? They had an unfair advantage, they had strikers, we didn’t. We did have enthusiasm, but that alone won’t help you win trophies or even contribute to mixing it with more complete teams.

After the game, a friend reminded me of when another manager was trying to make his way at Spurs, but he didn’t have the reputation as Mourinho had when he took over as coach of our club. That man was Keith Burkinshaw. Ironically enough, on the same day as that fateful match at old Stamford Bridge, forty two years earlier, we faced Luton Town in the Second Division. Yes, in 1978 we were trying to get out of the Second Division. The same year Ossie Ardiles and Ricky Villa joined our club (but they weren’t with us then), and the rest is history, as they say.

On the 22nd of February, we played Luton Town. Glenn Hoddle (what we could do with him now!) scored twice to win the game 4-1. Other scorers were Don McAllister (defender) and John Ducan. That result helped us clinch third place, ultimately helping us secure promotion ahead of Brighton on goal difference. Also, to note; we scored the most goals out of any club in the top three divisions that season (83). But that was then, this is now.

Before the game, there was concern in the camp. We knew that every game was going to be a struggle. With no recognised strikers, we were pushing our luck. Surprisingly enough, we managed to keep them at bay and only conceded two goals. We did miss many chances, but it wasn’t to be, even though Lamela got one back for us.

Chelsea wasn’t also having a smooth run of late either. The honeymoon was over for Lampard after Monday's home loss to Manchester United, their seventh at Stamford Bridge in all competitions this season. Their Champions League qualification was in jeopardy, and the manager's methods were under scrutiny. Lampard had dropped £71m keeper Kepa Arrizabalaga for 38-year-old free transfer Willy Caballero and maintained faith with struggling Michy Batshuayi ahead of the experienced Olivier Giroud. Those are decisions of such importance that he needed better results to justify them.

Mourinho, before the game, mischievously claimed in advance that he knew which system Lampard would use and the personnel involved (he was right) and this was a big day for the 41-year-old boss.

It was a day when it came down to stick or twist for this relative managerial rookie. Lampard went with the latter and got one over his old boss.

Mourinho has injury problems, as we know, but carping about how difficult the next three months will be is in danger of providing us with a ready-made excuse for coming up short in the chase for the top four, the Champions League and the FA Cup. But maybe there is a method in his madness. As we know, a lot of what Mourinho does is psychological mind play. It also could have the effect of leading the other teams into a false sense of security.

Maybe that is what Mourinho is hoping. Football is part luck, part psychological, the rest, skill. Less has won more, more has walked away with their heads in their hands. We are going to need all the luck we can muster in the next couple of months if we are going to show anything for our troubles.

Whatever way Mourinho does it, he has to do something, otherwise, this season could turn on Levy and us. He needs top four placing to get the money he wants.

Football fans, or clients as they are now to be called, want something for all that money they are paying into the club. Spurs fans have been patient, very patient.

As for Giovani lo Celso challenge on Azpilicueta, well, the referee gave it as a nonfoul. Whatever the rights or wrongs of that verdict, he survives to fight another day. And we need all the luck we can get. To have sent him off would have severely damaged an already depleted team.

Sadly the statistics don’t look good for us (against Chelsea). They have won three consecutive home games against us in all competitions for the first time since a run of seven between October 1996 and March 2002.

So, what is next for us? Well, we are back in the Premier League on Sunday, when we face Wolves.
There really isn’t that much more to say, other than look beyond the last couple of days and hopefully, luck will reappear again  for us. Otherwise, our season could turn into a disaster… or even more of a car crash.

It hasn’t been a pleasure looking over that day, but it is what it is, now we must move on.