They laughed (Villa), but we had the last laugh 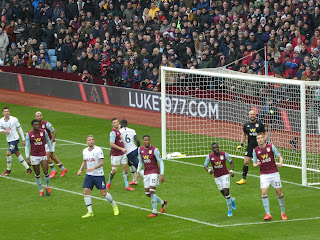 As I arrived at the match, there were a few fans – Villa fans – congregating around the entrance. As the Spurs bus arrived, they were chanting “we are going to thrash you and stay up!”.

To the very last minute, we were on alert that the match could be called off. On our way to the ground, the coach rocked here, there and everywhere. The pitch inspection gave it the all-clear. To be honest, when you looked at their pitch, you would wonder what all the fuss was about. Granted, there were floods around Aston and near the stadium. The police and fire brigade were also out in full force.

Nevertheless, a quick inspection, by the team and then a thumbs up… lovely jubbly, as Dell Trotter would say. We were in!

A win against Villa would set us up with a fantastic encounter against Chelsea this Saturday. And United have given us a boost by beating Chelsea 2-0, which means there is still a point difference between the two teams.

We’ve been criticised of late, and some considered we’ve been lucky so far. I disagree. I thought our camaraderie and ability got us where we are today. It isn’t Mourinho’s team, yet, he will need some time to build and direct the players in his way of thinking. As for the table; there is only one lucky team, and nobody is going to catch them any time soon. As for those below Liverpool, well, I must say, I think we can catch them.

We are 11 points behind Manchester City and 10 points behind Leicester City. Both clubs have been wobbling of late. We’ve lost eight games, both City’s have lost six. To catch them up we would have to win four games, they would have to lose four. There are 12 matches left. With a possibility of 36 points on the table, and there is still a long way to go. So I wouldn’t say beyond the possibilities of our imagination. Nothing is over until the fat lady sings. So, yes, I am optimistic and confident. And we’ve still got to play Leicester City at home. After the victory on Sunday, those confident juices must be bubbling over.

To the match: they made the stronger start and took the lead via Toby Alderweireld's own goal – our defender nudging Anwar El Ghazi's cross past our goalkeeper.

The Belgian compensated by equalising with a superb angled effort that flew into the top right corner of the home side’s goal from 10 yards.

We went in front when Steven Bergwijn, our new player, won a penalty after being judged to have been fouled by home defender Bjorn Engels.  Even though Engels headed in from a Jack Grealish corner to again draw the sides level, his late mistake allowed Son to race clear to place the ball past Reina as Villa's miserable run against sides in the top half of the table continued.

Villa blunders cost them again. Dean Smith's side have earned just one point against teams currently in the top half, a broader concern for the Villa boss is that eight of their 15 defeats this term have been by a solitary goal. To be fair, this was another occasion on which they could have taken at least a point from a hard-fought contest but for separate errors. Engels having an afternoon to forget, well, not by us.

The 25-year-old Belgian, who started because of Tyrone Mings' nonappearance through sickness, had a difficult time dealing with the drive and pace of Bergwijn, Son and Lucas Moura.

It was his rash challenge on Bergwijn that allowed us to go in at the half-way stage with the lead in a game Villa had enjoyed the better of until then.

In his late lapse, Engels allowed the ball to run under his boots, enabling Son to score the pivotal goal. Engels' first goal for the Midlands club will have provided little relief.

To be fair on Villa, they had enjoyed a bright start as Grealish imposed himself on the game. We tried to get him once, maybe there could be a next time?

Son's goal after 93 minutes 34 seconds is Spurs' latest winning goal in the Premier League since August 2009, when Aaron Lennon netted after 94 minutes 24 seconds against Birmingham.
Son became the first Asian player in Premier League history to reach 50 goals in the competition (51 in total after his brace). Indeed, he's the sixth Spurs player to reach this milestone after Teddy Sheringham, Robbie Keane, Jermain Defoe, Harry Kane and Christian Eriksen.

Toby Alderweireld became the third Tottenham Hotspur player to score for and against his own side in the same Premier League game, after Gareth Bale vs Liverpool in November 2012 and Chris Armstrong vs Arsenal in March 2000.

What's next up for us?

One final thing I must add. As the clock ticked away, our heads dropped, we thought it was going to end a draw. Then out of the blue Son scored, keeping our chances alive for us to finish in the top four. As the goal went in, we went mad. Hugs, kisses, falling over each… it all went ballistic. Looking over at the away end (Spurs end), the same was happening there. The Villa security, police and Tottenham security jumped into action to stop our supporters getting on the pitch. When the final whistle arrived, the players went over to our supporters to thank them for their roaring support, braving the weather and enthusiasm. As all this was happening, my mind went back to us arriving at the stadium and their fans chanting at us. Then quickly back to the present, I thought "To Dare is To Do, and we indeed Dared and Did on that windy swept day at Villa Park. We are Spurs, we are magic, you know! So bring on Chelsea… we are ready and waiting! Come On You Spurs!

It has been a pleasure,