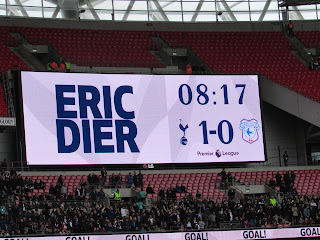 Yes, we won, and according to statistics we have had our best joint start (18 pts). But watching this match and the others this season, it didn’t feel like it. It reminded me of when we played under Tim Sherwood (we won, but the way we played didn’t give us hope for the future). Of course, Pochettino is not Sherwood, but a much better manager. So, we expect more from him.

I’ve always said that games against teams struggling at the wrong end of the table are more likely to suddenly bit you were you least expect it.

The omens weren’t good for that Saturday morning. I got up early and it was bucketing down, and it was supposed to be like that until 8pm that night. But that shouldn’t have stopped people turning up (the attendance was 43,268). I haven’t missed a home game for over 7 years and no matter what quality the team is, or what competition it is, or friendly or not, I will always go. And I also travel to away games, no matter who we face or how far I have to go. But then again the colour blue and white runs through my veins.

I left home at 9 am and eventually got to the stadium at 12pm. As I walked down the steps of Wembley stadium – as always – you are ambushed by the touts offering tickets at extraordinary prices. But they no longer shout “Purchase tickets,” but do you have “any to sell”. Just in case the police are listening and confiscate those you have. Once they've collared a punter they then take you away to somewhere private – no eavesdroppers – so that you can make your purchase.

Had a look in the Spurs/ England shop, but nothing new to tempt me. I can’t wait until our giant Superstore opens at our new ground, then it will have much more to lure our money away from our pockets.

Into the line for Premium/ Executive members entrance. Chatted until the deadline – 12.30 pm – and then hurried through the security checks, through the turnstiles and up the escalators to the Bobby Moore suite.

On arriving at the Bobby Moore suite we got our free programmes, then a wristband is put on – this is to let security know that you are entitled to be in the hospitality lounge. Finding a much bigger table, amongst the usual four-seater ones, to accommodate all of us, and this time we were joined by Jeff (who usually is in the lioness lounge/ Premium). I got the wines etc. and settled down. Food was a burger and chips (it varies each match).

Two-thirty arrives, but before we leave to find our seat, we wait for the team sheets to be distributed to us Premium members. Once that comes, we get our tea or coffee – all free – to take to our seats.
Reading all that, don’t you wish to partake in such amenities? But then again you might prefer a more traditional season ticket or purchase of tickets through your OneHotspur membership. We are all different and are tickled in many different ways. When I started going to matches, I waited in the queue with my money at the turnstiles and then in. I progressed to membership, which was followed by a Season ticket. But I am getting older, and I want a few more comforts from life before I exhaust myself on this earth and travel beyond earths existence. Then again I might just be turned into manure and fertilise the land. But enough, I hear you shout. OK.

To the match and something more substantial.

This was a match we should win if we want to challenge for a top-four spot, and win we did, but not very convincingly. On top of that, they had a player sent off in the 58th minute. We still couldn’t capitalise on their one man down. Cardiff was and still are at the bottom of the league… but they fought against us bravely. They could even have got an equaliser, and it wasn’t beyond all possibilities to have nicked it in the end. Spurs were playing by the seat of their pants.
On what I’ve seen so far – home and away – I think Spurs will struggle to get into the top four. Granted, it is possible to turn it around, but we are shaky. We’ve been fortunate so far.

Pochettino said his side "need to improve a lot" despite edging to victory over Cardiff to equal their best start to a Premier League season. What an understatement. I know we’ve got some of our creative players out injured, but that is what the squad is for (to fit in when injuries occur). It is no good crying over spilt milk (i.e. not buying in the transfer window). We’ve got a squad, and they should step up to the mark when called upon. Anyway, Eric Dier scored the only goal of the game in the eighth minute, tapping in a loose ball from inside the six-yard box from a corner.

Cardiff, who had to play most of the second half with 10 men after Joe Ralls was sent off in the 58th minute, remain without a win this season and fall to the bottom of the table, but that wasn’t because of a lack of trying. They were a very plucky side. They will fight to stay up.

So there you have it. Now we have a two-week break, with the possibility of more injuries from the England match (hope not!) and then straight in to face West Ham on their own turf. Fingers crossed we can come away with a victory.

Once the team had disappeared down the tunnel, we made our way to the hospitality lounge. We waited an hour before leaving, as there wasn’t much point going immediately, only to get caught up in the crowds trying to make their way to the station.

One great thing being a Premium member is that we don’t have to leave straight away as we can go back to the hospitality section and wait for the crowds outside to die down. We are allowed to wait up to an hour, and sometimes longer. Free coffees or teas – until your heart is content – or you can purchase alcohol, soft drinks or crisps (think I would make a good hospitality salesman… any jobs vacant at Spurs?).

We left about sixish and then made our way to the station. I got home at 8.10 pm.

I did use the word “frustration” in the title of this article, and we were frustrated, but we won. We’ve only lost two games in the league so far and have had our best joint start. It is never over until the fat lady sings. So let us look on the bright side of life. I can’t see us winning the league, but a top-four spot is not impossible (even though I sometimes say differently). We are still in all competitions, even the one that hasn’t started yet (FA Cup). With a two-week break from Premier football, we might solve some of our injury problems and then come back even stronger to face West Ham in the league, followed by City and then the Hammers again in the Cup. And that is without even mentioning UEFA Champions league.

So enjoy the break and see you soon