PSV Eindhoven; what a day, what a fiasco. 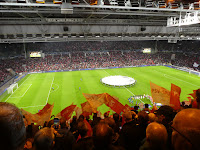 PSV Eindhoven; what a day, what a fiasco.

Wednesday the24th to Thursday 25th was a couple of very memorable days (in more ways than one). It all started on Tuesday the 23rd. Actually, it started a couple of months earlier; I had booked my flight before I had even got my ticket, so when I got confirmation I was as happy as Larry. Remember; there was only a limited amount of tickets for away fans, as they had a small stadium (something like 32,000).

On the Tuesday I had to take my dog to my daughter’s house, from there (1pm) I made my way to our new superstore in Tottenham. Very impressive and of course I purchased a few items (I shall be going this Wednesday before the West Ham game).

From the superstore, I went to Hanna’s house (35 minutes away). I stayed the night. Got up at 2.30 am and made my way to Southend airport (flight was at 7.05 am) and arrived at 3.30 am (I would rather be there early than late). Met up with Martin and his dad, the flight was about 40 minutes. From there we made our way to the train station (actually the train station was in the same place). An hour and 40 minutes it took us to reach Eindhoven and then a taxi to Novo hotel.

We freshened up, had a great dinner (with a bottle of wine) and then made our way to the ground by bus (401).
Now the fun starts; at 4pm we got in the queue to get our tickets (don’t forget that the Spurs ticket office - at their ground - closed at 5pm, officially... official or not, it stayed open a lot later). The line stretched a long way back. Martin’s father was of an age that he didn’t want to stand too long, and of course I suffer from arthritis, somebody on our behalf complained and talked to one of the Spurs Stewards, and she took us to the front (so, thank you to the young lady). As we were in the queue, we heard stories and witnessed many people being turned away because of the wrong ID and trying it on. Many arguments pursued and abuse was thrown.

Finally, we got through; now, the joke among my friends is that my passport photo doesn’t look like me (actually it looks like one of those people you see on Crimewatch, and it was taken many years ago). So, up I pop to the window and the first thing the girl says to me, “This doesn’t look like you”. I froze... whether it looked like me or not, it was me. People had been turned away for far less. I then showed her my driving license (same picture), a printout of the ticket I purchased and of course I had credit cards on me. Reluctantly she handed over my ticket, then I was given a wristband. Watched for a few minutes as more Spurs fans were turned away (abuse again) and then we made our way to the PSV Eindhoven shop, where I purchased some souvenirs.

Because we purchased our tickets as Premium members we had the option of either sitting with the Spurs – caged – supporters or in the mixed section (it cost a bit more). I went for the mixed section (better view and more comfortable). Ironically they didn’t check our ID or wristbands but just let us through on the scanning of the ticket. Went up many flights of stairs. Bought a non-alcoholic drink (that is all they served) and then made our way to our allocated area, where flags of Spurs and the home team was printed and placed on our seats.

While we waited for the kick-off I talked to two interesting supporters, one of them joined my Spurs Facebook page. We chatted about Premium service, the new stadium and past and future games (travelling wise).

Before the kick-off PSV put on a dazzling show (lights flashing etc.) and then the players came out.

So, what can I say about this match?

The game was one of our best performances, but also one of our most tragic (result wise). We outplayed the Dutch team in every department, even the Dutch supporters came up to us and said we should have thrashed them. But we only got a draw. Why? Arrogance, nervousness by the goalmouth and we didn’t take the chances that were gifted to us. They scored because of our stupid errors.

Our chances of reaching the knockout stages of the Champions League are "nearly over", according to Mauricio Pochettino.

Hugo Lloris sent off for a moment of madness before Luuk de Jong's 87th-minute equaliser denied us a Champions League victory over PSV in Eindhoven. He raced from his goal to bring down home winger Hirving Lozano as the visitors led 2-1 with 11 minutes left. Former Newcastle forwards De Jong then poked in to leave us still without a win - and like PSV, with only one point - after three of their six Group B matches. And that was because of our gift to them.

PSV had taken a first-half lead through a deflected Lozano strike, after the Mexican caught a dawdling Toby Alderweireld in possession. Then Lucas Moura fired in an equaliser five minutes before the break and Harry Kane headed home Christian Eriksen's cross to put us ahead early in the second half.

Pochettino added: "[Our chances of qualifying] are nearly over. We'll see what happens now in the game between Barcelona and Inter Milan but with only one point after three games, it will be so difficult.
"I'm not going to blame any player. If someone is to blame it's myself, I am responsible for the team. The players are only there to play," the pissed manager.

Not for the first time in this season's European campaign, we paid for a late lapse of concentration – leaving us, and PSV, facing an uphill battle to qualify for the last 16.

Arguably we were the better side on the night, but two individual errors cost us. First, Alderweireld was dispossessed by the excellent Lozano, who then found the net for the game's opening goal, with the ball looping in off the Belgian as he got back to make a challenge. Then Lloris displayed poor judgement, as he flew out of his area late on to bring down Lozano, who was bearing down on goal. It is perhaps those two moments which define our European campaign flecked with late slips so far - as we conceded twice in the final five minutes to lose our Group B opener 2-1 to Inter Milan in Italy in September.

"The situation with Hugo was maybe unfair, but that can happen in football," said Pochettino. "Was it a red card? In my opinion, I think no, but we cannot blame the referee.

"But if you score more goals you are going to win the game. That is why we are so disappointed, not with the decisions but with ourselves because it's a game you must win."

We did endure some misfortune in attack, as Kane headed against the bar in the early stages while Davinson Sanchez saw a goal disallowed with the England captain judged to be in an offside position.

So that was that, apart from some Spurs supporters kicking off and causing trouble (taunting the home supporters) in our mixed area. Ironically, the heavily searched and guarded area was where our away supporters were caged in, and they were all as good as gold. Just our end caused the trouble. Luckily the stewards flew into action and defused the situation as soon as the taunting began.

After the match, we went to the bus stop and talked to Spurs and PSV supporters. The PSV fans we talked to all said that we should have won as we were the better side.

We got back to our hotel, went for a drink and something to eat… chatted and then went up to our rooms.
Got up at 7.30 am and had breakfast and left the hotel at 9.30 am. We made our way to the City centre and spent the rest of the day sightseeing in Eindhoven (some beautiful churches, restaurants and places to see). Had a great meal and wine and finally made our way to the station and back to Amsterdam’s airport (past Ajax stadium). Had another meal and got on the plane at 9.55 pm. Got to Southend airport at 9.40 pm, then to our cars… I then got held up in bad traffic and decided to make my way to Hanna’s house in Goodmayes and stayed the night. Left at 8 am. Another M25 hold up and got finally home at 12 pm.

Even though it was a bad result, but a good performance, we had two great days (without mentioning the cockup with our tickets at the ground). Now we must wait until Monday to resume our Premier league campaign, this time against City, which will be followed by West Ham (Cup) and then Wolves, away on Saturday.

All good fun when you are a Spurs supporter. Until we meet again don’t lose any sleep over past results, there is always tomorrow to make amends.