Skip to main content
Posted by Glenn Renshaw September 17, 2018
My trip to Wembley, a “home” game that should have been in N17.

Saturday the 15th of September, 12.30 pm kick-off was supposed to be an all-important game (historical, you could say). A game that was supposed to be played at our new stadium (N17), but ended back at our previous temporary home across London (HA9 0WS), Wembley. In fact, even that day shouldn’t have been our first trip to our new stadium, as there were supposed to be two test matches before. All cancelled. All put back to a later date, a date that still has to be decided. But we can’t cry over spilt milk.

So, Wembley it is, at least for a few more months (apart from, that is, when we face Watford in the cup, then we travel to another “home” match, and outside London; DK Dons territory/ stadium). Confused? Well, more to the point, if you are a Tottenham supporter then it’s all part and parcel of our current supporting life.

To be honest, for a grand opening of a new stadium then the kick off was too early for such a significant historical event.

Usual preparations; I left my house at 7am for a one hour journey to Ruislip and then on to Wembley. I’ve been to Wembley and old Wembley many times when following Spurs. The old Wembley was far more superior than its newer model. When I used to go to the original one, it felt like I was going to something special, the home of English football. Now, when I go to the new stadium it just feels like I am going to a glorified league club stadium, but with more seats. When they knocked the old one down, they also tore the soul out of it and never put it into the new stadium. But like many fans, I carry those great past memories with me.

Walking up Wembley Way we have an entirely different atmosphere and feel to it than we did walking up Wembley way last season. Then it was made to feel like home. This time around it is made to feel like Wembley stadium hosting Tottenham Hotspur and all its supporters. Once over then feck off, back to the hole you’ve crawled out off (or that is how it makes you feel sometimes).

I did my usual waiting at the Executive area entrance until the boys in suits allowed us to enter at 10 am. Well, there was a little bit of a shakedown, then a quick check in our bags in case we’ve got concealed sweets, bombs or amputated heads… all clear, then up the escalator to the Bobby Moore suite and then greeted friends and settled down for the next two and a half hours. Grub, drinks, chat with past players, entertained by an outstanding band. Even though I’ve been critical of Wembley, here, in the Bobby Moore suite, the Tottenham staff did an exceptional job making us feel at home. I can’t fault them for what they’ve done for us.

In the hospitality area/ Bobby Moore suite there was a host of ex-players; Ardiles, Clemence, Allen, Hazard, Falco and the list went on. Intermingling, we chatted to them and laughed together. All predicted an excellent result for us. I got my picture taken with Ossie Ardiles (Micky Hazard took the photo for me), Micky himself and a few others. A great moment before the match. 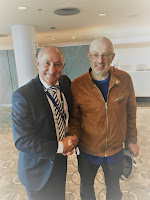 Half an hour before kick-off we made our way to our seats and watched the pre-match entertainment. That is Spurs and Liverpool coming out of the tunnel for a warm up and kick around. Back in so that Chirpy can do his warm-up pratting around, with his sidekick Dolly (not sheep, but a genetically modified partner nevertheless) and then the team news and wait.

The players came out, and we felt confident and expected a great result, but the mood quickly changed. We all got behind the team and shouted out in the appropriate places.

Where I was sitting there was a lot of hostility in the air and Spurs and Liverpool fans were mingling together (hospitality area does allow fans mixing) To the match:-

To stand any chance of challenging for the title we have to beat teams like United, Liverpool and Watford, but one out of three isn't title contender quality. People keep saying “it is early days,” but those that are also challenging; Liverpool, Chelsea and City are currently marching forward with strength, while we flounder at the first hurdle. It isn’t good enough.

The Reds emerged impressively from their biggest test so far at Wembley with a victory that was far more emphatic than the final scoreline suggests and keeps them level on points with Chelsea, who are top of the Premier League table on goal difference. We didn’t even look interested. Right from the start, we allowed them to take control, gradually we got into it, but then faded again as Liverpool retook control.

Georginio Wijnaldum scored his first away league goal since joining Liverpool. Vorm tried to clear but was left with the ball in the back of his net. The visitors were dominant almost throughout and doubled their advantage after 54 minutes when Roberto Firmino scored from on the line after Jan Vertonghen turned Sadio Mane's cross on to his own post.

Andrew Robertson and Lucas Moura hit the woodwork for either side, but the Reds could and have made this a more convincing win, with Naby Keita and Mane missing chances to add to their goal tally.

Erik Lamela pulled one back for Spurs deep into stoppage time, and Son Heung-min saw a late penalty claim turned down after he was brought down by Mane, but it was all too late, and Liverpool went home with the spoils.

Mauricio Pochettino said: "I am not disappointed - the game showed how competitive the Premier League is and we played a really good team who started very well.” He might not have been disappointed, but we were.

I talked to Micky Hazard after the game, and he said that we were “bad”. We didn’t have a clue. The question is, where do we go from here?

After the final whistle, we left with our tails between our legs and made our way to the hospitality area. Stayed an hour afterwards, plenty of cups of tea and biscuits said our goodbyes and then made my way back to Ruislip (dejected). Said farewells to my cousin Susan and Roger and then, before going home, picked up Hanna at Park Royal and home.

Tomorrow I am going walkabouts (as the Australians call it) and off to Italy, Milan to be precise, for the first match in our Champions’ League group, against Inter Milan. Another story, another time, until then, take care (or, should I say, hope to see you in Italy?).