Skip to main content
Posted by Glenn Renshaw September 21, 2018
My trip to Milan, beautiful sights but a sad ending to a wonderful few days. 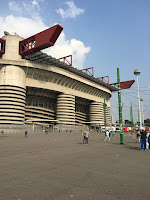 I was delighted to get my ticket (£78) for the Inter game. Funnily enough, this was my third trip this year to Italy. In February I went to Turin to see Spurs draw with Juventus, then for my holidays I went to Rome for a week and visited Vatican City and the Colosseum, and now it is Milan and Inter.

In fact, I had booked my hotel and flight – from Gatwick – before I even knew that I had got a ticket for this match. At the same time, I booked the other European away trips.

I got up early on the 18th September (1.30 am) and travelled for an hour and a half to Gatwick airport, got there at 3.05 am and went through the procedures and waited for my flight (6.55 am). Got to Milan at about 10ish. Looked around the city and then made my way to my hotel in Lotto. It was a sweltering day so had a shower and then rested. At 4 pm made my way to the stadium – a 15-minute walk – and took in the atmosphere. The fans seemed friendly. The food and beer was great (and the Ice cream). So much so I repeated that exercise (food eating, that is).
Before you arrive, you are told by Tottenham that you must show your passport with your ticket. But when going through the checkout points they just glanced at them and let us through. I and a few others didn’t go up in the Gods where the majority of Spurs fans were, we were in the neutral area with Spurs and Inter fans. Everything seemed very hospitable.

I rested in my plastic chair and took in the view. From outside it was awe-inspiring, as it was inside. Saw Martin and his dad, friends from the Premium area. Had a chat and then watched all the razmataz, followed by the players coming out. The fun was about to start.

So many hopes rested on this season; new stadium (promised early, but not yet delivered), building on the last couple of years, so a good performance was expected for this season. The first half was ok, nothing spectacular, but I thought we were better than we were against Liverpool. We got to half-time, and all was equal.

Went out for a drink and something to eat then settled back with high expectations.

Seven minutes after the start Eriksen scored and we were in the driving seat. We had most of the possession and everything seemed to be going our way. About 10 minutes left and our confidence was at an all time high. Then late goals from Mauro Icardi and Matias Vecino stunned us as Inter Milan celebrated their return to the Champions League with a dramatic Group B win. Shock was on our faces.

How could this happen? We were a far the better side. Not again, we thought. After losing to Watford and Liverpool this was supposed to be our pick-me-up match. We had stepped up a gear after an unconvincing first period, beset by poor passing. But a winner in added time sent us to a third consecutive defeat.

Where did it go wrong? Arrogance? We thought we had won it, so we dropped our guard? Inter was nothing special, in fact, they had their own problems. But they sensed our weaknesses. So, were now for Mauricio and the team? With a new stadium on the horizon, it could all end up being a wet squid. Even in some quarters, some are suggesting that we might not even get to our new stadium until next season. So much was promised and so far so little has been given. 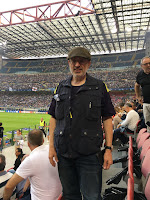 We were dejected. Their fans went wild and danced in front of us and all we could do was sit there with our heads in our hands. Inter fans were like a crowd possessed. On the way out they mocked – in good spirit, I might add. I walked the 15 or so minutes back to my hotel. They beeped their horns on their scooters and cars as they went by. It was like a circus. Then I got to the hotel and the manager saw me and rubbed it in (he was an Inter fan). I asked for a bottle of wine to drown my sorrows and went up to my room. I spent the next couple of hours reading the news – on my phone - and all the comments about how we slipped and in the process cutting our own throats.

Next morning I paid my bill and left for the main town centre. After another couple of hours sightseeing, I made my way to the airport. Five O’clock came and I got on my plane, with a few other Spurs supporters (most had left on an earlier flight) and finally got home at 9 pm.

All I can say, it was a great trip, and an enjoyable stadium/ atmosphere but a bad result (awful for us). Now I/ we must pick ourselves up and prepare for Brighton (away).