This article was supposed to be about my trip to Watford, the great day out and a walk home/ drive, with a celebration in my heart. Instead, it was like a volcano erupting with sad images and thoughts all the way back home. According to the script, it shouldn’t have ended this way. We were a Top four team, Watford was a mid-table team (at best), who, up until now, had had the good fortune, in their start to this Premier season, to begin well (exceptionally well). Instead, their luck continues while we rue the day of missed chances and poor choices. 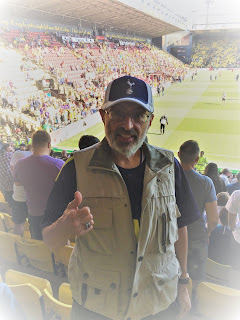 Watford is a stadium I had been to many times in the past. It is a town and borough in Hertfordshire. It is situated 15 miles northwest of central London and inside the circumference of the M25 motorway. It is also easy to access if you live in London or the surrounding area. It was also easy for me, as I live in Berkshire. Like going to Wembley, I parked in South Ruislip, got a bus to Ruislip Manor, the Metropolitan line to Harrow-on-the-Hill and then on towards Watford. From Watford station a 15-minute walk to the ground.

Once there, there was a mini (very mini) carnival, or at least attempts at one (bless their cotton socks), with mascots, a man on stilts and a steel band. Yes, too much excitement for one day. I presumed, wrongly, it was created to cheer up their fans, who were going to feel down later on. As things turned out, their carnival atmosphere was only going to add to their exciting day. For us…
After getting 35 minutes of too much excitement, I went into the ground, got myself two hotdogs and a coke (they actually left the caps on, obviously trusting both sets of fans not to throw them at their teams/ opposition; I usually carry a spare couple to replace the ones they’ve taken off).

After talking to friends I finally sat down, actually I was sitting down, but stood, as one has to do when in the way end, it makes the no-standing policy look stupid. And of course, no concerns for the old, those with partial disability (arthritis), or those that wanted to sit, because that is what they paid for (just a whinge).

It came over the tannoy the team news.

Lloris was injured, that was why Vorm was in.

The show began. Our thoughts drifted to their fans as we looked over at their smug faces, as we believed that they were going home with nul points. We were the real deal, a top-four team, they, on the other hand, had struggled the previous season and will continue to struggle in the Premier League. This season was going to be no different for them, we, on the other hand, had learnt our lessons when losing to the minnows. No more underestimating those below the sixth position.  We were all out to win the league, or die trying. The first goal went in, actually an own goal, but we thoroughly deserved it. We had most of the possession, and, yes, I repeat it, we were a top-four talent who were improving and going places, and who had learned from past blunders. So, that settled, we could relax and wait for the destruction of the Hornets in the second half. God, we were full of ourselves, as I hoped the team were. No more underestimating relegation fodder.
In the 69th minute, Deeney scored, but not to worry, an early blip. We were vocally behind the team, then they got another in the 76th minute. Disaster? Or nothing to worry about as we could quickly get back on track.

That second goal of theirs was another set-piece that allowed the Hornets to turn the game around in 76 minutes, as defender Cathcart nestled a powerful header into the top corner of Vorm's goal to ensure Watford's best ever start to a Premier League season continues. So, that’s that. No wonder the pundits talk about other clubs having a chance winning the league and not us.
We were dejected, I can tell you. We walked out of the stadium in silence, apart, that is, from those that were blaspheming all over the place about our performance. Who could blame them.
The attendance was 20,141. There were quite a few Watford seats unused (probably thought they were going to get a drubbing, and didn’t like the sight of blood… sadly, it ended up to be ours, not theirs).
The walk to the station was long, arduous and painful. The Hornet fans were in a joyous mood, we kicked the cat all the way to the station.

Arriving at Ruislip Manor station, then bus and to my cousin's house. As Roger opened the door, I quickly said, “Don’t say it!”. After a cup of tea and biscuits, I left. I got home at 9.30 pm.

What an exhausting Sunday it turned out to be. I decided not to go to the gym the next day, I’ll leave that for another day. Hopefully, I will feel better by then… I was hoping that I had dreamed it all up and that we actually had won, but alas, no chance. It was what it was and we must now pick ourselves up, brush ourselves down and think positive thoughts.

As I write this up I am booking my flight/ hotel for the European matches. Hopefully, they will be something to look forward to. Results that will propel us up the champions league and then onto the next round. As for the league, we’ve got Liverpool next, we could turn it all around and bring the smile back to our faces.

Until next time (Liverpool), enjoy the break, recuperate, stand tall and get behind the team. I am sure the Watford game was just a blip (trying to end positively!).