Skip to main content
Posted by Glenn Renshaw August 22, 2018
My trip to Wembley to see our first “home” game against Fulham 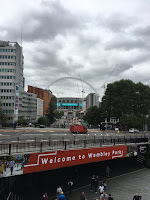 Last season we all expected to start this new season at our new home, then the news came out that it won’t be our first game, after all, but Wembley, for one match. We were content with that. Then we got into August and everything was thrown up in the air with the announcement that our new home won’t be ready for the Liverpool game on the 15th September and that we will probably have to wait for that privilege for at least a couple of more months. Not happy, but what can we do? Move on and just enjoy what is before us. Anyway…

After the last game at White Hart Lane, I had to make parking arrangements for when I went to Wembley. Luckily for me, I’ve got a cousin that lives in South Ruislip and her and her husband were kind enough to allow me to park on their drive. It would also be nice to catch up on family matters.

This season I was still going to see them when I went to Chelsea, Watford and Fulham away, as they graciously allowed me to park at their house again. Little did they know, or even I, that I will be staying at her home a little longer over the coming months. But I am grateful to them for their kindness. 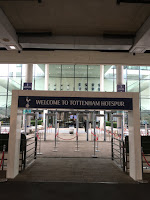 So, Wembley it is. An early morning wake-up, usually procedures (dog walks etc.) and then I left my house at 9.30 in the morning to get to my cousins Susan’s house for about 10.35ish. Chatted with Roger, my cousin's husband, for a while and then made my way to the bus stop just around the corner, the 114, to Ruislip Manor, and then a train on the Metropolitan line to Wembley Park. About 40 minutes in total. Got there at about 11.45.

Some of you might be asking, why do I leave so early? Well, because I live in Berkshire, so, I have to travel on the M4 and the M25, and if anybody knows anything about these motorways, you will also know that they can get very congestive (in other words, a pain in the arse). To go from my house to White Hart Lane, it takes 1 hour and 30 minutes. There was one time I left 4 hours before KO and only managed to get there 15 minutes before the match started. I remember that day we faced United and their coach was delayed, thus delaying KO time for about half-an-hour. 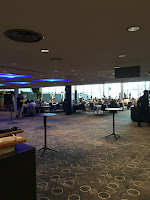 Anyway, back to the Fulham/ Wembley game. This time, walking down Wembley way was different. No Spurs banners on the lamp posts or posted around the area, but plenty of Spurs employees intermingling with the supporters, offering to paint faces (that is of the children), giving them stickers or generally pointing them in the right direction. Or even take your pictures in a cardboard cut-out so it could be posted on Twitter or Facebook or not.

Once there, there was nothing to do until they let us in. This time around I was in the Bobby Moore suite. The reason I was in the Bobby Moore suite, rather than the Gold Bar – Premium (as last season), was because they were refurbishing it, and of course, they weren’t expecting us back so early (maybe for a few Trophies). It cost slightly more but well worth it for the hospitality etc. Not only that but they had to upgrade us as there wasn’t a full complement for the Bobby Moore seating section, so we got a higher grade of seating, which basically meant extra padded seats at a higher level. I suppose it is ok if you are suffering from piles then you’d appreciate the extra accommodation. I guess the wealthier clientele suffer that problem quite a lot. But it is not for me to judge.
Anyway, got in the queue at 12.15 and saw Martin and his dad, who were also part of our group. I met them both last year when I took up the hospitality season ticket. They both were very helpful in pointing me in the right direction (flights for matches aboard etc.). It was nice to see them after a long break. We had a good chat while we waited, finally getting in at 12.30 on the dot. Made our way up three flights of stairs (ok, escalators) to reach the Bobby Moore suite and we found a table for us to sit on. We were eventually joined by Steve, another part of our group, and who I also met last year.

Two and a half hours before KO we spent the time chatting. 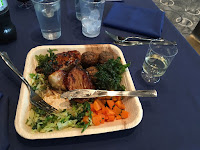 During that time we were joined by Paul Miller, the ex-Spurs defender. Also, the great Pat Jennings, David Howells and a Tony Galvin and a host of other Spurs legends joined us to talk about old times and even new times. It is always great to catch up with these players, whom we spent many a day watching them playing for our great club.

At the Bobby Moore suite, and of course, the Gold bar – Premium last season, they always served us good food, and the manager or overseer of the hospitality lounge popped over, shook our hands, welcomed us back and chatted. Then there is Themla, Spurs Sales Account Manager, who also popped over for a chat and to see how we were doing. I will say one thing about Spurs hospitality representatives; they are such lovely people to talk to. Always prepared to give you the time of day and sort out any problems you might have. And of course, if we are not there, but home, and have issues (concerning tickets etc.)they are always a phone call away. I take my hat off to them.

On another issue, I didn’t apply for the Manchester United away game ticket as I was expecting to go to the Test day for the new stadium. When that was cancelled, I was gutted as that meant I had also missed out on going to Old Trafford, luckily I mentioned this to one of my friends, who then said he had a friend who had a spare ticket for that match. Brilliant and he only charged me face value, £30. 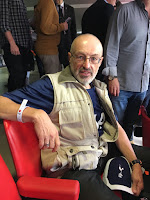 Half an hour before KO we got to our seats and embedded ourselves in. Watched all the activity below (ball kicking, Chirpy and Molly or whoever the female mascot is, doing their stuff, then the players came out for a warm up). The players came out to a big cheer, as they should do and always have done. Over the tannoy came the team news and we cheered or debated the merits of the team selection.

After the warm up the players went back in to get ready, another big applause.

Then the players came out proper. They went through the usual opposition greeting, then they all went into the circle in the middle of the pitch for a minute of clapping Spurs great legend Alan Gilzean, who died recently. A great man who I met several times over the years, the first time when he joined the club back in the sixties. The last time was at the beginning of our Wembley trips last season. Then the minute was finally up, a big cheer followed and then everybody settled down for the match. The players made their way to their positions on the field. The whistle went and the crowd got behind the players. Not a full house, but not that far away from the capacity at our new stadium, but of course it far out beats the old White Hart Lane stadium, which had a  capacity of 35,000.

I thought we played well and were far better than against Newcastle. A good team selection with the right substitutions. We also didn’t look tired, as we did in the previous game.

Harry Kane finally scored his first Premier League goal in August as we maintained our 100% start to the season… yes, that is over two games. Our England striker had failed to find the net in 14 previous games in the first month of the season, and it looked like his barren run was going to continue as he had a goal ruled out and hit the crossbar at Wembley. But that didn’t stop him fighting for every chance to get in the right place. Today’s game saw a much sharper Kane. His luck turned with 13 minutes remaining as he cleverly turned his marker inside the area before tucking the ball into the far corner for his side's third.

Lucas Moura had opened the scoring in the first half with his first Premier League goal, curling a brilliant strike beyond Fabri's dive. 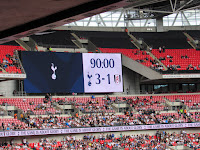 Fulham - who lost to Crystal Palace last weekend in their first game back in the top flight following promotion - levelled just after the break when Aleksandar Mitrovic nodded in from close range.
England hero Kieran Trippier restored our lead with a stunning free-kick that stirred memories of his strike for England against Croatia at this summer's World Cup, before Kane's strike secured the points that moved us to the top of the Premier League with two wins from our opening two games. Sadly, that top spot didn’t last long as Chelsea beat Arsenal 3-2 to move above us. With Watford and City also winning that weekend we dropped down to the fourth spot, on goal difference. The top five clubs all have the same points, six.

We stayed after the final whistle, while others left to get home, to cheer our team off the pitch.
Because of the high capacity trying to get to the tube station, it wasn’t worth leaving immediately,  so we – that is Martin, his father and myself – went back into the hospitality suite for a cup of tea, a chat with the hospitality manager while we waited for the crowds to go down outside. One of the waitresses bought us some hot pies to eat. Very nice! We waited about an hour and then left for the tube station. We said our farewells and then went to our trains. My train came quite quickly – Metropolitan line to Ruislip Manor, so no long wait. Got to my cousins about 6.30, popped in for a cup of tea and a chat. Did our farewells and I finally got home at 9 pm. A long day, but well worth it.
Now I got my ticket for the United game at Old Trafford, I phoned Hanna, my girlfriend about my good fortune and we both decided that we would make a day of it and book a hotel and come back Tuesday morning.

So, two down and now we move onto Old Trafford on the 27 August, bank holiday Monday. And I will be there. Watch this space.