December into Christmas into January for Spurs 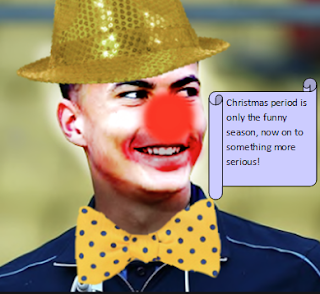 December into Christmas into January for Spurs

Christmas month came rushing towards us. Our first game was against United, where we lost 2-1 away. Mourinho’s old team gave us a what-for! But never mind, we thought, we would get a few hiccups on the way, but our next December game was against Burnley at home. A bit better this time around, as we thrashed them 5-0. Ah… things are on the up...

Next came Bayern Munich, but don’t panic as this was a no-match. Both teams had nothing to play for as we were both through (a workout really!). Besides, we had bigger fish to fry. That fish or mutt was a Wolf; Wolverhampton Wanderers to be precise. We came (to their ground), we saw and we beat them 2-1, thank you. Next up would be Chelsea (another old Mourinho team); this match was just before Father-fat-man-slim came down a chimney (near you) to pinch all the pies and glasses of milk and leaves presents in return, which they didn’t buy (spoiler; the children’s parents purchased the gifts) and then quickly buggered off, into the land of fantasy.

Chelsea, unfortunately, was another hiccup (too many hiccups and you’ve got a problem). Son was sent off, and a Chelsea player did an impersonation of a despicable characteristic (i.e. to show what was happening to him off the pitch… you get my drifter?). All that culminated in us being beaten 2-0 (the nightmares of five-point-Lane was coming back to us in a horror-loop-show). But Christmas is always a time of unusual happenings, and to get your nuts out and put up that lighted-fairy-tree. Oh, and drink copious amounts of alcohol… pissed even.

After the Chelsea game, we trudged off and walked into Christmas actual. Turkeys, puddings, crackers, nuts, and what else one fancies, were laid out on our tables. We got merry, went even gay… then the night approached and the next day was here in a quick tickle (are you following kiddies?). The seagulls flew down White Hart Lane, turned left into the High Road and quickly got slaughtered… well, I say got slaughtered, but it was us who promptly conceded a goal first. But the second half, thanks to Kane and Deli, the winged-fested-rats left in a flurry. Yes, we feasted on winged-meat for many days to come, and very tasty it was, thank you.  Then we took a few days off to prepare ourselves for a visit to Carrow Road, where they… story not quite going to plan – held us to a draw.

Nevermind, we’ve got the pathetic and struggling Saints, so another three points in the bag, or at least we hoped. But it was them that had the last laugh. So we trudged back to our dwellings, thinking what a Christmas turkey this is turning out to be.

Not to worry we philosophised, our next game will be a breather, little ol’ Middlesbrough in the FA Cup, followed by… yes, and even easier match… a doddle you could say. Liverpool! Yes, I know what you are thinking, is it worth us turning up? Just think, three points in the bag and a trip to Southampton again (of course we didn’t know that at the time). So, to cut a long story short, Middlesbrough held us, and Liverpool only walked away with a 1-0 goal win. Overall, it was a shit Christmas, and you can go and bloody stuff that fat bearded prick-man who storks the Christmas skies in his Arsenal jumpsuit kit.

But I must be fair here, our performance against Liverpool wasn’t as bad as one expected. We started off all over the place, but once we got into the swing of things we could have won it if we had taken our chances (isn’t that the story of Spurs so-far?).

Tanganga performed well and probably will get more games. Eriksen was booed when he went off. I am surprised that Mourinho let him start. Perhaps to put in the window for future buyers. If so, then it backfired.

But we mustn’t dwell too much on the Liverpool game and the rest of our Christmas fair. We must now concentrate on the Middlesbrough and the Watford games and see if we can restore some sort of pride and sensibility and find a winning formula. New players will come in, in this January transfer window sale. We need to mould all into one fighting machine, a machine that will challenge everything. Easy really… you will probably end up wondering what all the fuss is about?

If you want to read more of my articles then press on the link below:-